Our Pastor Emeritus, the Rev. Dr. Larry G. Mininger, has faithfully ministered to the congregation of Lake Sherwood Orthodox Presbyterian Church (OPC) for over forty-six years. His newer part-time role as Pastor Emeritus involves limited visitation and preaching, while praying for the congregation and the church of Christ around the world. “It is a great privilege to love and serve succeeding generations of the same family units, maturing in the faith together, while welcoming new people into our fellowship.”

II Corinthians 3:18—“And we all with unveiled face, beholding the glory of the Lord, are being transformed into the same image from one degree of glory to another. For this comes from the Lord who is the Spirit.”

While at Lake Sherwood, Pastor Mininger has mentored numerous seminary students, interns, and assistant pastors who are now ministering in the OPC, the Presbyterian Church in America (PCA), and other denominations. Others serve in seminaries, missions, radio broadcasts, and publications. During his ministry, Lake Sherwood Church has helped establish new churches in the Presbytery of the South of the OPC, including a daughter church in Oviedo. Pastor Mininger has served on the overseeing Session of several of these mission churches.

He is a member of the Home Missions Committee of the Presbytery, having previously served on the Candidates and Credentials Committee, the Visitation Committee, as chair of the Youth Committee, and several terms as Moderator of the Presbytery.  In collaboration with the PCA, Pastor Mininger provided thirty years of leadership for Southland Student Conference, primarily as Director of the Middle School Camp.

At the denominational level of the OPC, he was elected Moderator of the Sixty-sixth General Assembly. Twice he represented the OPC as Fraternal Delegate to the PCA General Assembly. He served on the OPC Christian Education Committee, the Committee on Home Missions and Church Extension, and as an Ambassador for Worldwide Outreach.

For several years Dr. Mininger taught preaching courses at Reformed Theological Seminary, Orlando, as Adjunct Professor of Practical Theology. He was elected to the Boards of Trustees of Westminster Theological Seminary, Covenant College, and West Orlando Christian School, the latter as its president. For twenty years of his pastorate he also preached the Word of God monthly to the homeless and transients of the community at the Orlando Union Rescue Mission. He presently serves part-time as Student Care Administrator at Reformation Bible College in Sanford, Florida.

Pastor and his wife Gail have raised all five of their children while at Lake Sherwood. As adults these children now serve the Lord in four different states and one foreign country (Myanmar). The Miningers have been blessed with fourteen grandchildren. Pastor enjoys watching golf and football, dating Gail, and buying donuts for the grandkids!

“Come, be a part of a loving church family!” 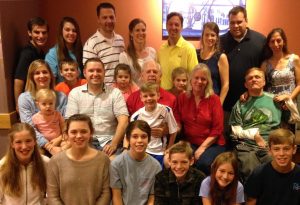